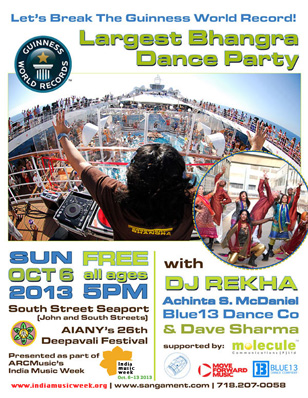 Join DJ Rekha as she sets the Guinness World Record for The Largest Bhangra Dance Sunday afternoon, Oct 6, at 5pm! It all takes place at the South Street Seaport - walk to the end of John or Fulton Streets, the stage is next to the big black sailing ship, 'Peking.' The hot dance set starts at 5 with music, dancing and a practice session in preparation for setting the record. Bring a crew and join 10,000 others for this fun and family friendly event. Don't forget to post, chat, tweet, blog, ms, crowd, face all your friends...

The World's Largest Bhangra Dance is part of India Music Week, Oct 6-13, organized by The ARChive of Contemporary Music. (www.arcmusic.org) - a full week of concerts, radio shows and academic events occurring around the world to celebrate the importance and beauty of Indian music.

DJ Rekha is a producer, curator and educator based in New York City. She is the founder of "Basement Bhangra™, Bollywood Disco and co-founder of Mutiny Club nights. She was named "Ambassador of Bhangra" by the New York Times. Rekha was the sound designer for the TONY award-winning Broadway Show, "Bridge and Tunnel" and the associate producer for the NPR Radio Documentary, "A Feet in Two Worlds." Her debut album, DJ Rekha presents Basement Bhangra was released in 2007. In 2009, DJ Rekha was inducted into the New York City's Peoples’ Hall of Fame. Her record label Beat Bazaar Music issued its debut single release, Pyar Baile worldwide in Nov. 2011. She hasplayed for President Obama and has shared the stage with M.I.A., John Legend, Francios K, Sasha, Outkast, and many more. She has curated events for Celebrate Brooklyn, Central Park Summerstage and has performed internationally. You can see her perform live the first Thursdays at Le Poisson Rouge in New York City and hear her weekly podcast Bhangra and Beyond on www.breakthruradio.com You can see some DJ Rekha videos here
It takes a great many great people to swing an event like this -

Dave Sharma’s foundation as a master percussionist is only one feather in his expansive musical cap. Having performed globally with a wide array of artists, including Escort, Moby, Cheap Trick, Kailash Kher have made him one of NYC's most in-demand performers and producers. DJ Rekha and Dave Sharma are frequent collaborators and musical comrades. They recently joined forces to create a genre-defyingdance floor banger with a remix of “Exotic,” Bollywood superstar Priyanka Chopra’s single,featuring Pitbull.

Achinta S. McDaniel is a pioneer of contemporary Indian dance in the United States, working as a leading choreographer on both screen and stage for more than a decade. Her work appears in feature films, commercials, music videos, and live theatrical dance productions from Los Angeles to Mumbai. She has worked with Bollywood stars and choreographed for popular TV shows, like “The Amazing Race.” In 1999, McDaniel founded Blue13 Dance Company, the country’s first contemporary Bollywood dance ensemble, developing her signature Bollywood-Tech™ style. Blue13 has performed to sold-out audiences from Las Vegas to Paris.

The Association of Indians in America (AIA) is the oldest national association of Asian Indians in America. The New York chapter was founded in 1968, and for more than 25 years the group has been organizing an annual Diwali festival. The organization showcases India’s rich cultural traditions and supports charitable work.

Molecule Communications, based in Mumbai and New York City, is a respected resource within the entertainment industry bridging East and West, fostering international dialogue and facilitating collaborations among artists, writers, filmmakers, musicians and industry professionals. Molecule Communications produces special events and conferences such as Ticket to Bollywood to educate aspiring artists, filmmakers and musicians and provide networking opportunities on an international scale. We aim to connect people to global opportunities related to India’s history and connect the global community through Bollywood film, extending from India to the entire Subcontinent (Pakistan, Sri Lanka, Bangladesh, Nepal, Bhutan) and Afghanistan, Canada, the United States and South America. Thanks to Ajay Shrivastav for all his help.


Records are made to be broken